Well I should be grading papers as we hope to head to the beach tomorrow for a few days. We had planned to go last week but were rained out from two tropical storms hitting. About 900 people’s homes were damaged in the Guanacaste area and the rains caused local mudslides but we didn’t see anything too destructive around our house.

We were up early as Jacob (our 18-year-old) left to fly back to the US after spending three weeks here. His plane took off (hopefully) about 15 minutes ago and he will be picked up in Atlanta by his older brother Sam. Mark and he figured out the exit visa payment — $26 per person to leave the country. You pay at a main desk in the airport and everyone has to pay in order to leave. In other countries this is levied into the price of the ticket but here is separate.

We are all sad about Jacob’s leaving but so glad he could come for at least three weeks. Having experienced his older brother leaving home last year (well I’m actually in denial of this and like to think of him just being on a sleep-over somewhere), I am very cognizant of how short a time we have with our children living at home. All our travel memories include the boys; from Sam at 6 months fast asleep on an Amtrak train that had broken down in the middle of the Arizona desert to trying to wrestle a double stroller, newborn and toddler on and off the subway in London (including Mark carrying them all up a huge, steep and broken escalator to get out of the subway). Travel is not always easy or glamorous with babies and young children but somehow it gets into their very being and senses even at such a young age. Plus we have found having children is a gateway into being more accepted and part of new communities. Playing at the local playgrounds and pools gets children and parents interacting with new friends. We have had waiters pick up our children and carry them off to feed them snacks and treats that we hadn’t thought of ordering. Sharing a tired smile with another mother when your toddler is throwing a big fit about leaving the park connects you to moms from every culture.

So it feels full circle to see our 18-year-old take off on his first international flight alone. Knowing Jacob this is just the first of many journeys. I know all parents say this about their children but he really is an incredible young man. I learn so much from him as he quietly seeks to make the world a better place. He is an activist who doesn’t shout or yell or make others feel bad but rather just gently tries to model a different path. I have tried to talk him out of some demonstrations or events because I’ve been worried about his safety but he just explains the steps he has taken to be safe and manages to reassure me. Anti-KKK rallies, Food Not Bombs, Gay-Rights marches and more. He lives peacefully and gently in the world and tries to get others who don’t practice such tolerance to change.

Let’s just hope he and his brother who is house-sitting (see I said he was only on a sleepover) manage to get along for the next two months in peace – while figuring out who is going to cut the grass! He’s also a wonderful photographer and has taken most of the photos so far on the blog so let’s hope I can continue in his talented footsteps. 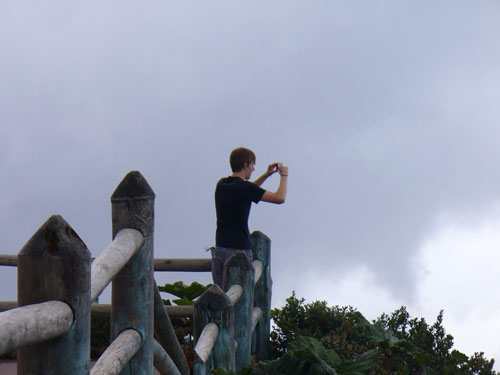 On the road to the beach