The first night in Manuel Antonio we had a pretty heavy storm and the radio station announced we had another tropical storm heading our way. We were quite upset about this but headed out and found a neat restaurant that had been created on the hills overlooking the water. El Avion restaurant was built around a converted C-123 plane used by the CIA in the 1970s to run arms to the Contras in Nicaragua. Usually the views are spectacular but we had to be content with quick glimpses of the water reflected in huge lightening flashes! The food was good and some of the better we have had in Costa Rica but quite pricey for what it was. We spent $75 on one appetizer, three juices, two glasses of wine, and four entrees. Here is Max at the bar entrance. 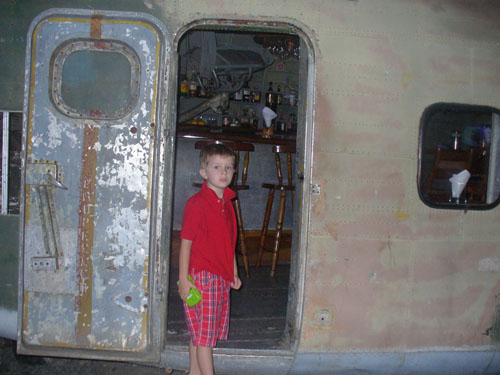 We headed back to our hotel where we actually had a house with three levels. The place had great views of the surrounding jungle and gardens from the big picture windows and balconies, lots of beds, television, and two bathrooms plus kitchen. No phone and no hot water except for the separate water heater in the shower that gave off a nasty electrical burning smell and only slightly warmed the water. However the most unpleasant was the incredible amount of wildlife that also “rented” the place. We arrived back at night to find the kitchen area overrun with huge ants (a good centimeter long) and various other beetles and crawlie/flying things. There must have been 300 plus ants heading around the place and these suckers were not things you could squash with a paper towel – these required at least 3 whacks with a shoe to drop. The next day I quietly mentioned it to the hotel clerk and she just smiled and said it was normal here and handed me a can of bug spray. We later sprayed the doorway but these ants just looked at us, laughed and ran faster! We gave up.

I know, I know it’s the rainforest and we are in their home – all that blarney. But when I rent a hotel room I really do not want to share it with local critters. I know I’m being squeamish and not getting into the jungle spirit but so be it. I HATE bugs! I actually quite welcomed the orange gecko that seemed to live above my bed as I hoped it would eat anything close to me. And after a few glasses of wine each night I managed to fall asleep without imaging things crawling on me.