Well we had good news because the next day we awoke early to brilliant sunshine and no rain. We quickly threw on swimsuits and headed to Manuel Antonio National Park. After turning down multiple offers of private tour guides we had a lovely breakfast overlooking the beach of strawberry pancakes, passion fruit smoothies, and incredibly fresh omelets (the eggs here are free-range and deliciously dark yoked).

To get into the park you have to cross a polluted little river but it was low tide and so we were able to get across by scrambling over some rocks and a little hill. Leaving at high tide we paid a small boat operator to shuttle us across – we had heard it was polluted plus snake infested so we didn’t want to cross the then waist high water. Here is our Knoxville girl as she first hits the beach. 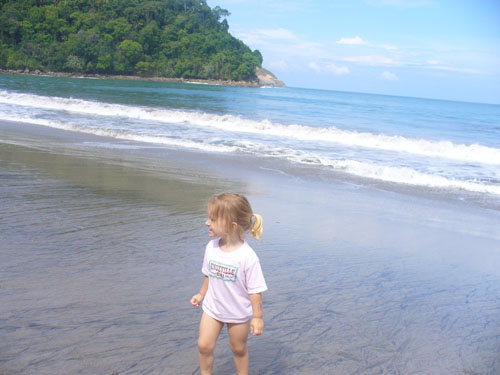 The park is not cheap for tourists and we paid $10 a person (12 years and over) to get in but that is for the whole day. It is not a large park and there are three main beaches and quite a few trails. Based on local advice we did not have a guide (they wanted about $80 for 1 to 1.5 hours) and just hung out on the beach. We saw quite a few small groups of intrepid hikers clad in sturdy boots and khakis and armed with cameras and camcorders following their trusty guides. They sure looked hot and sweaty from my view lying under a palm tree on a beach towel! 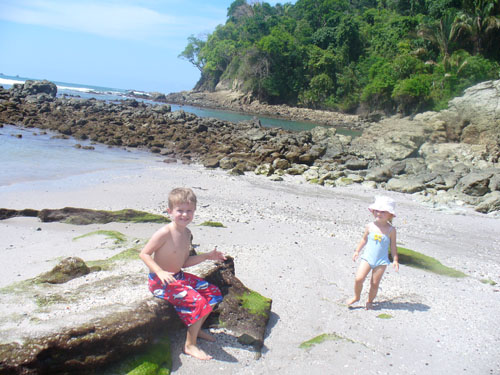 From our readings and locals’ description we thought we would see lots of monkeys and sloths and so when we could see none we were disappointed and thought it was because of the lack of guide. But I spoke to two separate people who said they had only seen one sloth from a great distance and no monkeys. We did see two toucans flying, various lizards and big iguanas plus tons of crabs scuttling around which made the children happy. The beach was lovely and the water comfortably warm. There were lots of rock pools with little fish and crabs so Charlotte and Max enjoyed paddling in those and discovering new things. Ben swam happily as he loves the water, especially oceans and waves. The riptides were not as strong in this area which was good as Costa Rican beaches are notorious for these and there are many drawings each year.

The sun was strong though and we really needed heavy sunscreen. By noon Mark was a little burnt despite the lotions and Ben’s nose and cheeks took a toll. I had the younger ones looking like little greased pigs so they were fine and since I have a tendency to enjoy my beach time lying in the shade with a good book, I didn’t see a reason to deviate from this except for occasional dips to cool off. Here’s Mark and Ben cooling off happily. 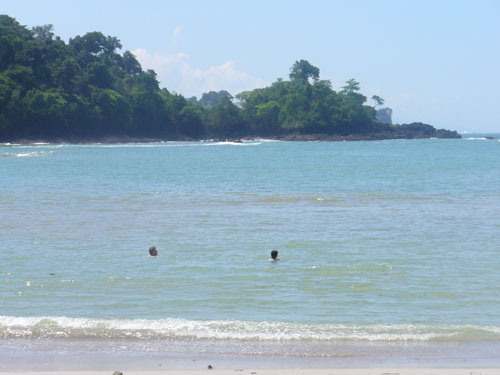 After another alfresco late lunch of pizza back in the hotel, Mark and Ben went fishing with one of the hotel gardeners. He took them to a pier area and they only caught two fish but had a good time. When they got back we went to the hotel pool at about 5 pm. There are three small pools at this hotel and on our side of the area there was only one other place rented so we had our pool to ourselves. Ben was the first there and yelled at us to hurry as the place was surrounded by monkeys! The pool was tucked away among big tropical trees and bushes and there must have been 30 small white faced squirrel monkeys (I think although if the pictures are of another type please let me know). They careened around, leaping from tree to tree and feasting on mangos and these long bean shaped fruit things. The hotel room next to us had a metal roof and they raced across this making a tremendous racket while leaping and pouncing on each other. They played in a similar fashion to cats I thought. Young cats do that silly pouncing and then bouncing sideways kind of teasing play and these monkeys had similar actions. They did get into a couple of fights especially when one came up and hit a baby. The mother went for the aggressor and pinned it down, hitting it in nasty fashion. I wondered whether there was sibling rivalry perhaps – not sure of this type of monkey’s social roles. Perhaps there will be a Monkey Manor show on Animal Planet someday! 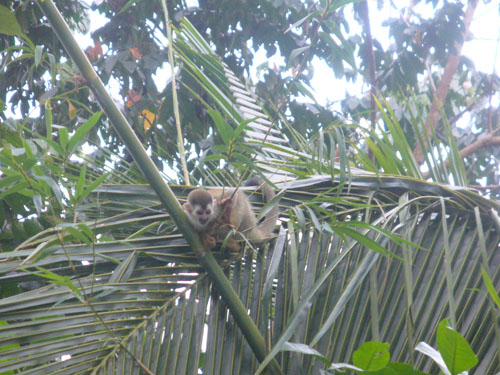 Hunger pulled us away from the pool by about 7:30 and we said goodnight to the monkeys (still going strong despite it being dark) and went off to dinner at the Black Cat restaurant. This is another nice alfresco place but with Italian food. Good but similarly pricey. The ants and wildlife returned to the hotel but a couple of nice glasses of wine again and I slept well. 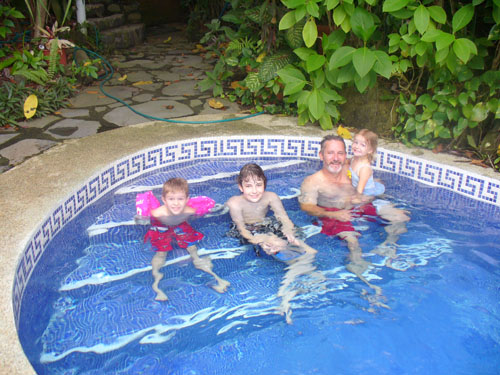