Never having stayed at an inclusive resort before we were quite amazed at the level of organization required to check in. We were all stamped and branded with non-removable arm tags that designated we were official and which of us could drink etc. We had maps and lists of activities and little cards to check out towels (do not lose these or you pay dearly), and times and restaurants we were to eat at. All very mind boggling but we quickly settled in, changed and hit the pools.

Ben was funny as after we had been swimming for awhile we went to an island bar area and got drinks etc. The snack bar had nachos, hot dogs, pizza, and all kinds of teen/kid food. He sat with a big plate of it and a frozen pina colada (non alcoholic) and said “You mean I can really get anything I want, when I want it, and it’s free?” When I responded yes, he just grinned hugely and said “Now this is what I call a vacation!”
So for the next three days we did nothing but lounge around the pool, stand and look at the beach, walk along the peer, and eat. No driving, no trying to find places to park or shop; just sheer indulgence. 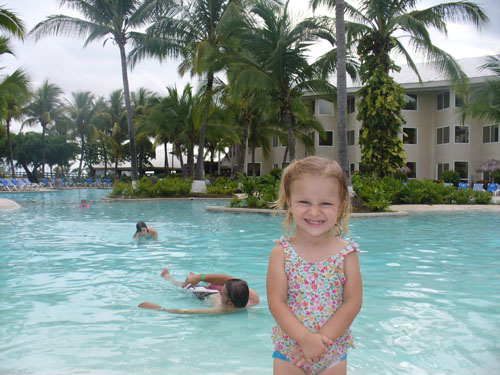 The pools were lovely with lots of shallow areas for little ones, big palm trees for some shade, little waterfalls and huge iguanas to keep things interesting. There were lots of families and children around. Hard to say where everyone was from but 90% Spanish speaking and about 10% American.

It was often easy to spot the Americans as they were the ones NOT wearing string bikinis and Speedos. Being European I remember skimpy swimwear but usually that was on very tiny French folks. Central Americans seem to have a good sense of self and are comfortable with much larger bodies being exposed in much larger ways. In fact larger, rounder bodies are supposed to be more attractive. Personally though I feel that when a Speedo or sting bikini bottom actually disappears from sight upon wrestling it onto a body, it is perhaps time to rethink that fashion style.

But the comfort with body was really good when it came to babies. I saw lots of little ones being openly breastfed right around the pool and even while walking into dinner. Swimsuits are easy to accommodate little one’s lunch. That is lovely to see after so many repressed and uptight countries we have lived (and nursed) in!

OK so the pools were lovely and thank goodness. The beach was even worse in this area of Puntarenas. The hotel bills it as black volcanic sand but having been on similar beaches before I am skeptical that this black muddy stuff was simply volcanic sand. Two rivers empty into this part of the ocean and the water is filled with churning black silt and huge pieces of trees and logs that kept rolling and crashing onto the beach. The waves were pretty big and that plus the log pieces made for no swimming. You didn’t really want to sit on the sand as it just seemed to turn to muddy yuck. But there was a long wooden pier and do we walked that a few times listening to crashing waves underneath us.

There was a Kid’s Club with some very hyperactive young men blowing whistles and shouting and leaping everywhere. My kids took one look and said no thanks. They did end up going on the huge inflatable water slide a few times and enjoyed that. Max (5) went the first time and since he is a bit tentative about wild rides or thrills I was stunned that he just climbed right up. I watched his face as he shot down the 15 foot drop on the other side, went airborne and then hit a pool of water. It was a riot as all you could see were these huge eyes and look of horror as his little skinny body shot down this slide. He scrambled out of the pool, shaking with adrenalin. The camp counselor raced and gave him high five and leaped around Max saying how great he did. Max stunned me by heading right back on two more times and even took his brother Ben on the next day!

Accomplishing that was very empowering for him, so much so, that he decided he was going to learn how to jump off the side of the pool and even get his face under water. And learn it he did! He’s so proud of himself it’s wonderful to see. The first thing he did when we got home was Skype his big brothers to tell them all about it.

Now the down side of making friends with the camp counselor was he told Max about the big kid’s show in the theater that night. We’d been briefed that each night there was a big show with varying themes but hadn’t opted to attend. Still that night Max made us as he’d promised his buddy he would go. And then Max made us sit through the whole hour of song singing and dancing – none of which he understood as it was all in Spanish. The guys had all the children up on stage dancing and playing games. It was noisy but fun. Max claimed he didn’t know there would be a disco and so hadn’t practiced his dancing therefore he couldn’t go up on stage (yeah like if he practiced he’d really go!) and Charlotte just clutched us in horror. But they enjoyed watching and being rather interested in child development I found watching the parent/child interactions fascinating.

I mentioned the food already and yes there were quite a few restaurants and bars. Drinking seemed to be high on the list for quite a few folks but we didn’t see anything negative. The food was OK. Not thrilling but for buffets and feeding lots of people it was alright but nothing to draw you back. One night we ate in the Italian restaurant that had menus and waiters etc. That was more relaxing than buffet but the food again was just OK. I had shrimp over fettucine but the shrimp were overcooked and a bit rubbery. The calamari we all looked forward to was rubbery and the batter fell off in your hands. I would say better “Italian” food at an Olive Garden (sorry Hilton). But you couldn’t be upset as the waiters tried so hard and were so nice and friendly. Everyone here is but there the staff seemed especially nice (and not obsequious just friendly).

We did have an unpleasant run-in with a “local” when we were walking along near the beach about 8pm one evening (black dark here by 6pm as we are near the equator). A dark animal shape ran towards us and kind of circled. Mark thought it was another coatimundi as we’d seen in other places but as it got closer he realized it was a huge rat and he had to reach his foot out and try and kick it away. The thing leaped up a nearby palm tree and we raced off. I am still a bit stunned that rats are that big! Think they must like the Hilton food a little more than we did!

One of the iguanas we discovered were hanging out in most of the trees around us: 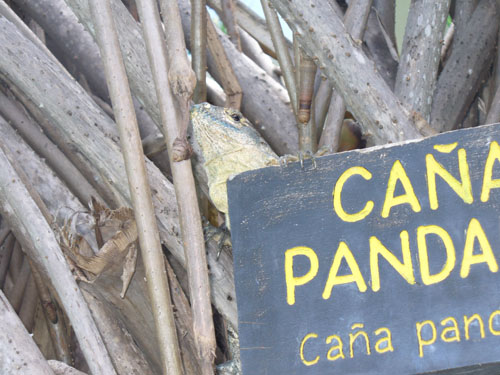 Anyway it was a lovely break and fun to swim in the pools and just relax doing nothing. I assumed my normal position on a deck chair with a book and this time I added drinks with lovely chunks of fruit in them. Total bliss!