We spent the day yesterday at the Waterfall Gardens and we all thought it one of the best days out we have had here. The waterfalls are about one hour from Santa Barbara on the upper slopes of Poaz Volcano.

We spent some time wandering around the grounds looking at hummingbirds, butterflies, monkeys, and in the aviary. These huge exhibits you walked around in were really lovely and filled with wildlife and beautiful trees and flowers. The butterfly exhibit currently “only” had about 2000 butterflies in it and sometimes they have up to 5000 (honestly 2000 was enough to keep you wanting to swat them away from your face – smile). 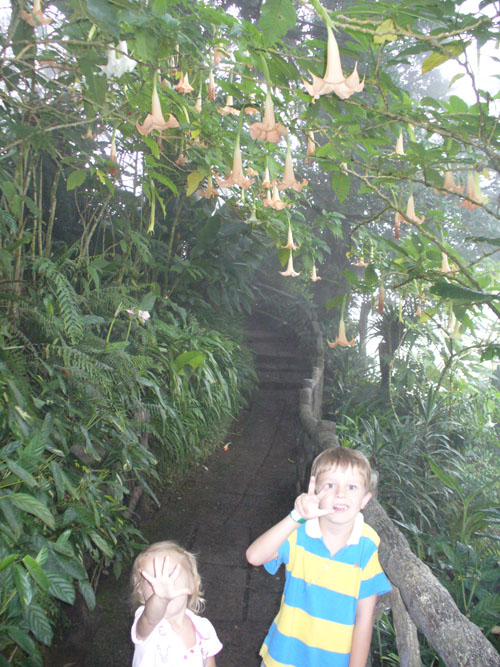 The morphos were really docile and landed on us easily. Plus the exhibits of caterpillars and cocoons were amazing and very well marked. We saw loads of them in various stages of forming cocoons or coming out. Neat and I have to say they had more exhibits than did the actual Butterfly Farm. 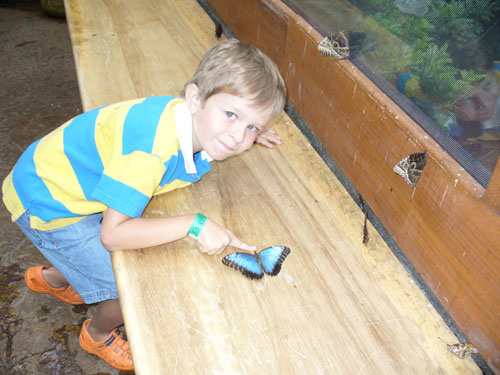 The birds were neat and Ben even had parrots land on his head as he was wearing a bright red baseball hat and they seemed interested in it. There were quite a few toucans and one of them decided the path was off limits to people. It pecked nastily at feet (not mine as I have to say I’m no bird lover and thus waved my umbrella at him before he got a run at me). Mark got bitten on the leg so let us hope they don’t carry some kind of nasty avian flu or rabies. 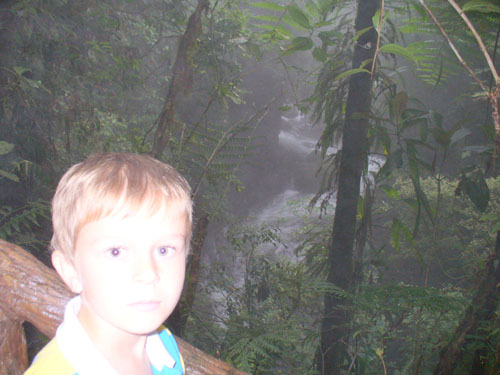 Max on the way down to a waterfall.

Snakes, frogs, monkeys, and tons of hummingbirds were all easily seen and we even got to ride in an ox-cart. The driver said the children and I should stand in it for pictures and suddenly decided we should also have a ride and took off. Tricky holding on as it tilted backwards and there was no back to the cart. Then both oxen of course had to produce copious amounts of dung just a foot or so from our line of vision to the front. But despite that it was quite fun and the children enjoyed it despite the smell. 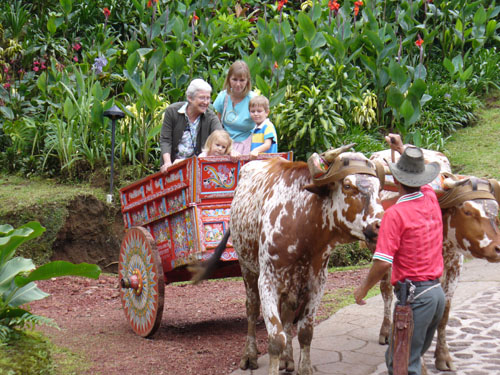 So after all that we hit the falls. There are steep steps and paths that lead down into the valley and you walk down and along the river and falls. It’s very narrow and wet and slippery but there is a good handrail the whole way. Charlotte did pretty well but Mark carried her down most of it. Grandma and I did alright but were very tired at the end. It didn’t help that we were trying to hold the huge umbrellas over our heads as we walked. I thought at first it was raining but we realized that it was actually a cloud that we were walking into. The falls are at about 4200 to 5200 feet and it gets a little chilly there; more so when you are wet. Of course we didn’t have all the snazzy hiking gear and fancy rain jackets that lots of the numerous American visitors there did. We actually looked more like the Costa Ricans who seemed dressed as casually as we were. And it was just fine. Little damp but we dried quickly and the samples of hot coffee at the ending gift shop were very welcome. 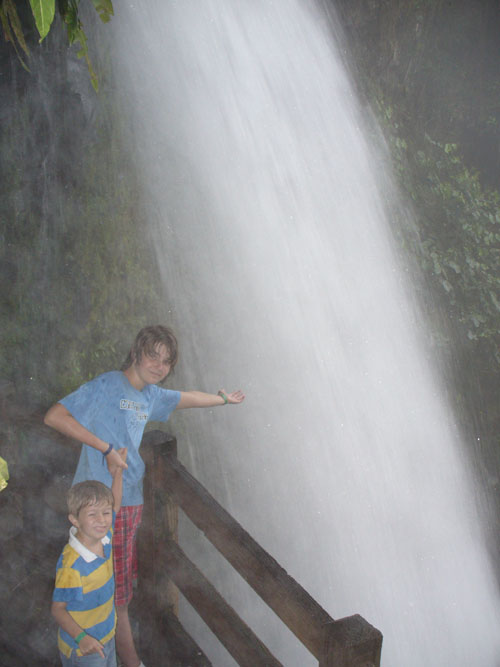 We also ate lunch there at the buffet and it was pretty good (but then we were very hungry and tired so may have had jaded taste buds). They had a nice fireplace in the restaurant and it was lovely to sit looking at that and then over the valley at the rolling clouds/fog that had the place socked in.
Oh and at the end of the trail we were sitting waiting for the shuttle bus to take us back to our car and there were lots of coatimundis and a lone racoon wandering around the hillside and eating bananas. The mothers had a few babies each and they were really sweet. Our children were delighted. 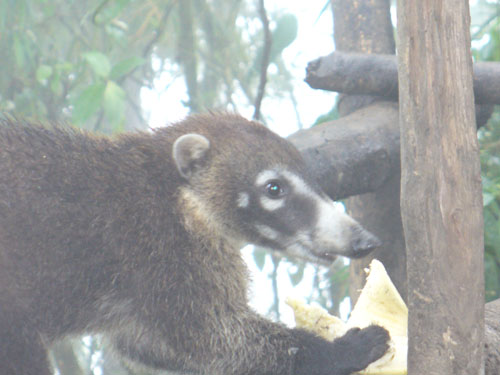