Seeing the Sights Day One

We couldn’t believe it when we woke up at 10a.m after all sleeping about 12 hours solidly. So we quickly set off to see the sights. It was colder and rainier than the previous day and in fact the few storms we ran into also created problems for France’s newly sworn in president as his plane was hit by lightening when he flew out after the ceremony. We did not see the motorcade but heard many sirens while on top of Notre Dame so think that was related.

We purchased 2 day cards for the Metro (expensive!) and quickly became acclimated to jumping on and off trains. The little ones did great and by day 3 were pros at this. I am surprised as neither of them has any real experience with trains and buses before now.

Our first stop as Miss Charlotte demanded was to the Eiffel Tower. It never fails to wow me and the children felt likewise. We huddled together for photos and wandered around a bit but did not go up. One elevator was broken and tickets online were already being sold a month ahead. No one felt any desire to climb stairs in the blustery weather. 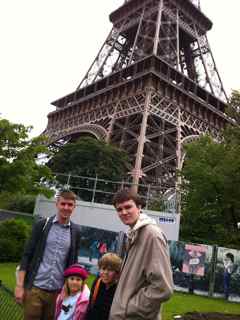 So then since it was raining a bit it was off to take a boat trip on the Seine. Very cheesy but fun for the children (and I always like seeing cities from this angle). Then we went to Notre Dame and even climbed the tower which has 387 very windy steps. Max was very happy that the highest floor was closed because of the weather so I think we only climbed about 200. He did fantastic though and was a real trooper even though climbing stairs is hard for him. The views were worth it. 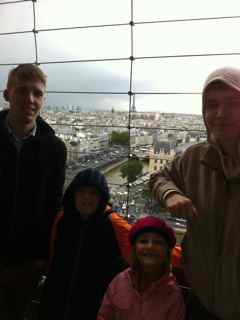 After a nice but expensive Brasserie late lunch, we bought brie and bread and made big sandwiches back at the apartment hotel. 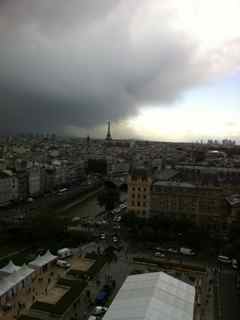