We spent a lovely day in Delft which is pretty close to The Hague and virtually connected. The trams run there so we don’t even need to get on a train and we can use our regular chipkaart for traveling. I think normally it will take about half an hour as we need to go into central area by bus and then change to the tram. We are getting faster and comfortable about which bus or tram goes where but still learning. 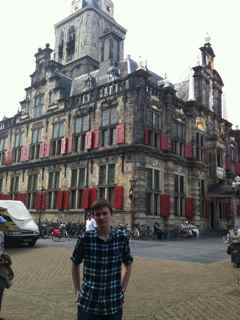 Anyway apart from the construction around the main station (everywhere we have been so far in the Netherlands has construction at the main train stations), Delft was lovely and quintessential Holland. Small streets along canals with lovely tall, row houses and ducks swimming by. We followed the spires of the churches and went to the main square as it was market day and so filled with stalls sandwiched between Nieuwe Kerk (new church 1381-1496) and city hall (built between 1300-1600). 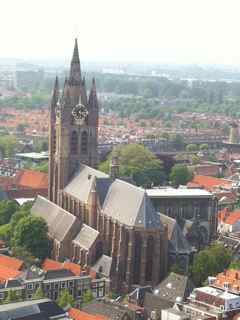 We went into New Church which is the main burial place for the royal family and has the tomb of the William the Silent (founder of the country). The Littles were very taken with the dog at his feet – in marble – that supposedly loved him so much it stopped eating after he was assassinated. Max read about the rather gruesome death of William’s assassin (flesh torn off and disemboweled kind of thing) and was quite intrigued. I think they are becoming more interested in history! 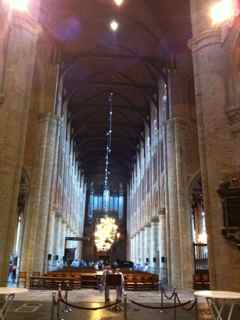 Then we climbed the tower which has 375 steps even smaller and more winding than Notre Dame. It is the second highest in The Netherlands. Poor Max was not happy but he made it. The views were amazing. 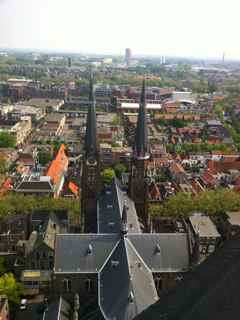 Inside the church they were setting up for an evening concert and one of the organizers invited us to sit and watch the rehearsal. A famous Dutch pianist was playing with a small group of musicians and it was lovely. Amazing music and the acoustics were incredible. We were lucky to get this free show as the evening’s performance was sold out and looked pricey!

The market was neat and had good prices on fruits and vegetables. We were not prepared for shopping really but it spurred us on to find closer markets or to head back there with our snazzy wheelie cart and load up.

We ate a lovely old restaurant next to the city hall. Salads and sandwiches but notched up a bit (duck breast etc.). It was in a beautiful building and the back wall was from 1300s but the main part was much newer and “only” from the 1600s. 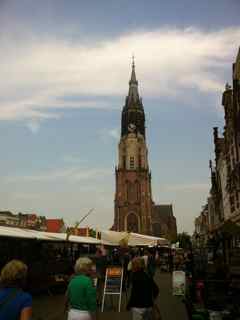 I did not purchase any Delft pottery on this trip but will probably have to get a piece or two. I actually saw neat things in the antiques stalls in the market that I will explore more. Anyway Delft is lovely and will be a regular place to go to I think. 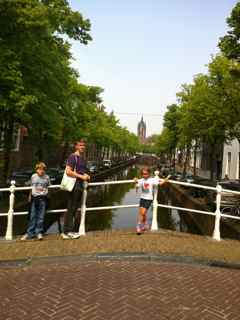 Heat Wave in The Hague