We visited the Escher exhibit which is in the het Paleis in the Hague. It’s a lovely old building – part of a row of houses and would not jump out as being a palace and purchased by Queen Emma the late 1800s. It’s a lovely building and the area is filled with grassy areas, sculptures, and has a peaceful feel. Worth a stroll around the neighborhood and supposedly on Thursdays and Sundays there is a book market in the area. We will have to go back and see. 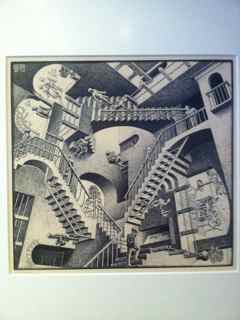 Escher has always fascinated me so it was good to learn about him and what drove his paintings. Plus he grew up and exhibited in the surrounding areas so it was neat to put visuals to the towns. He did a series of pictures using a birds-eye perspective from the top of New Church in Delft and looking down at the market place so since we had just climbed that tower and seen the same views, we were all interested in seeing his take on the same thing. I could see some similarities. The top floor has some hands-on exhibits to let you experience some of his perspective “tricks” and we got to stand in one room area as shown in the picture, where everyone looks different sizes. It’s a nice museum and about an hour or two to take it all in.