Visited the municipal museum today and luckily this one and a couple of others are right on our bus line so we pass them every time going into the center of town. The bus line we are on (24) is a great one as it hits all these sites including the Peace Palace. The Mauritshuis museum is currently closed and so many of the pieces have been put onto one floor of the G Museum. It’s a rather industrial and clinical building and except for a few period rooms, lacks charm. We liked the pieces on loan and quite a good array with Rembrandts and Vermeers. Charlotte had wanted to go because this she wanted to see Vermeer’s Girl with the Pearl Earing and so she was happy as it was on display. She said it was better than Mona Lisa as it was bigger, no crowd and she liked this painting more as the girl was prettier. Budding art critic here!

There were some lovely old rooms with high ceilings and period doors etc. but in the middle were strange Asian-inspired sculptures. I thought they had a rather Pokemon look to them or some kind of modern Manga figures – since there was no information about these we were at a loss to know what it was about.

There was large display of the Dutch movement by Mondrian. It did not hold our attention really (we like classics more) and downstairs had a very strange and large exhibit that we could not really figure out. Items seemed to be grouped by color (at least I think they were) with new, strange things like a shoe or photograph bunched in with older pieces. Perhaps there was a deeper meaning but it was lost on us. 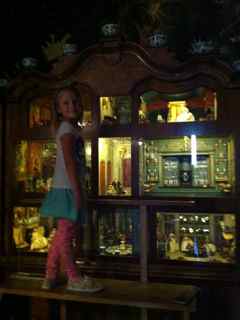 Anyway an interesting museum. I wouldn’t go back but glad we went and once they build the new art museum I think that would be a better place to head to.