We found cheap tickets on Ryan Air so decided to take those over to England. I had wanted to go by train/chunnel but it was almost the same price for one person to do that as it was for 5 of us to fly. Ryan Air does not give seat assignments unless you pay extra and you have to walk out to the plane after being herded into a waiting area. It’s a bit pushy but overall a good flight. We landed in Stanstead to rain and were a bit frustrated at having to be taken by minibus to our rental car about 3 miles away.

Again I had wanted to use trains but the car was really much cheaper for us all. They gave us a big upgrade from the medium (hmm compact really) I had ordered and we ended up with a snazzy Volvo SUV. Since it had been 20 years since I have driving on the left side and this is a right hand drive car, the added bulk and safety was appreciated. It was a little stressful but we took motorway most of the way up to York and the tip actually did take 4 hours just as google maps and the GPS stated. I say this because trips in the UK used to often be very variable and a 4 hour drive to Scarborough could take 8 if there were road works or unknown variables!

Dinner uneventful at a Little Chef which abound on the side of the road. I remember seeing one or two on the entire trip and now they are everywhere. Cheap and cheerful and easy to get into and out of. We got to York and the hotel is lovely – Carlton House which is an old, large house about five minutes walk to the walls and 15 or so to the Minster. The people who run it were really nice and the room very comfortable and lovely tall ceilings and period fittings. We had a room with a double, single and bunk beds.

The next morning we had a really nice and hearty breakfast (included) and all filled up. I do so love getting big pots of REAL tea. When ordering tea in the US you often get an old and insipid tea bag (I take my own) so this is nice and Yorkshire likes a good and strong brew!

It was pouring when we started breakfast but gradually stopped to a light mist when we stepped out. That continued all day and we only occasionally needed the umbrellas so not bad really. We made straight for the Minster with walks on the walls and a few shops along the way. Old fashioned sweet shops were fun and Jake remembered some things he has always liked. The Minster is always impressive and lovely but when we went inside they had the entire place set up with tables and dishes/glasses etc. for some event. The charge to go in (it was always free before) was 9 pounds per person so we skipped it as the ambiance was lessened given the restaurant-like feel. A shame as given it is the largest medieval structure in the UK and built between 1200-1400 it is worth visiting. 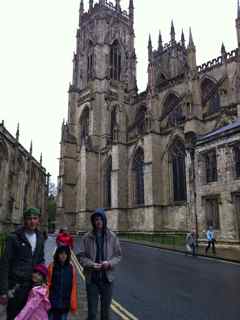 We wandered down The Shambles, a rambly street, that Max said looks like Diagon Alley from Harry Potter. Then it was on to the Jorvik Viking Center. I had taken Sam and Jake to this when it was newly opened 20 or so years ago and we loved it then and now. A line outside but it moved pretty quickly. You start out on a glass-floor where you can see parts of the Viking dig that took place below. There is a “ride” through the Viking village they have reconstructed and you sit in cars and listen to the information. The figures are bizarrely realistic looking but then were constructed from skeletons found right there using computer imaging. There are various smells and sounds to help with the immersion feeling and it was nicely informative. The Littles really enjoyed it and the exhibits afterward sparked lots of discussions.

It is a very small area with lots of people packed in to look at skeletons and items that were dug up and that was a bit stressful for those of us who really dislike crowds but well worth it. The display of skulls with massive head wounds from Viking weapons thought to have been used in one of the invasions was memorable. The Littles also had Viking coins hammered out for them as keepsakes.

We did some shopping after that – Marks and Spencers yeah – and then had a pub lunch. Although I am enjoying the Netherlands, the restaurant varieties and even stands in the market were wonderfully diverse and had more offerings than we are seeing in NL. 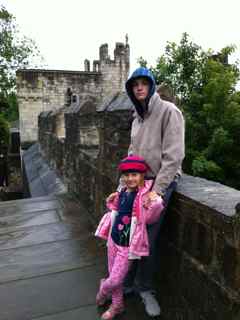 So then we got back into the car and headed out to Scarborough. I was quite excited as this Thanksgiving it will have been 20 years exactly since I have been home. The drive was easy, 45 minutes or so and we had no slow-downs but coming the other way looked bad as traffic wasn’t moving in quite a few spots. We made straight for Valley Road and looked at my grandmother’s house where I spent the bulk of my childhood, stopped at the duck pond and gardens, and drove around the sea front. Nothing seems to have changed at all really. Some of the big houses are not hotels or have restaurants in them but that was the case growing up. Valley Road has huge places as it leads right down to the beach and was a bit classier than some of the other areas. Scarborough is a Victorian spa town and has lovely architecture and sweeping vistas but the main seafront is well, tacky. It’s filled with amusements, bingo, ice cream, rock shops and fish and chips. No other word to describe it but tacky. Growing up it was the same but fun. Still donkey rides on the beach, ice creams, rock pools to explore, chips in newspaper, penny slot machines, life boat and lighthouse, stalls of seafood (winkles with a pin to pull the meat out), are all part of a traditional British holiday town and it’s HOME.