Set off early to the British Museum – raining of course but that meant it was a good day to be inside. The museum was full but not crowded so enjoyable. Mostly a few British school trips and Americans (same as at the Louvre). Max was excited and really enjoyed the Egyptian wings – he was the main reason we went there. They got their full share of mummies and we all enjoyed the Rosetta Stone.

We searched for the sword from Scarborough but no luck although we did get to handle some sharpening stones and axe pieces from thousands of years ago in a great hands-on presentation. An enjoyable few hours and it amazes me that entry is still free. Cannot go into cathedrals without paying exorbitant fees now but museums are free (church versus state). 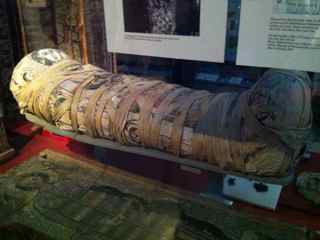 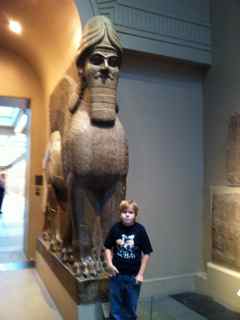 Still raining so we headed out to look for lunch and found a pub that allowed children in near Leicester Square area. Couldn’t get show tickets for that day in anything we really wanted to see or hadn’t seen before. The new one, Roald Dahl’s book Matilda is supposed to be really good but it’s sold out for months; something to watch for in the US later. Yes Prime Minister, an older British television show is now on stage and looked good but the children would have been bored sadly.

Since it was raining so heavily we ended up buying the tourist bus passes ($100 for 5 of us) and going around on that for a while. We were able to use it the following day too so at least justified some expense. The tube is cheaper here and children are free which was better than Paris. We paid 7 pounds for a day pass in the main two zones per adult. Oyster passes are good but cost 5 pounds just to buy so not worth if for a couple of days.

Oh the bus pass also included a boat trip so we headed down the Thames for an hour. Not as scenic a river as the Seine but still another view of London. Dinner was back at the apartment after a stop around the corner at Tesco Express (I will miss these). And then we spent the evening trying to get shoes and coats to dry out. Jacob was using the blow dryer on Charlotte’s – and mom; the microwave did not work!