Well guess what – it’s raining again. Actually it’s rained so much that they are doing emergency rescues of people in Wales and they say flooding is possible all over the south. What fun. We ended up taking a taxi to the Tower of London as it was somewhat within walking distance for us but the rain and tired out children was not fun. No lines to go in plus I’d bought tickets online earlier and only had to pick them up using my credit card that I’d paid with (I was worried as it stated you needed to print out the email but you didn’t — just the credit card). We saved a little money buying online but it was still pricey and yet worth it. 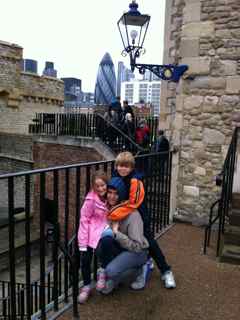 We first did the free tour with a beefeater and she was so much fun – -great sense of humour and good scary stories. I chatted with her later and women have only been allowed to be beefeaters for about five years now and she was one of the first. She spent 22 years in the military and all of them had also been on active service before going through the extensive recruitment process. She said there are about 300 people living in the Tower and some have children and families. What an interesting place to grow up in I would think. 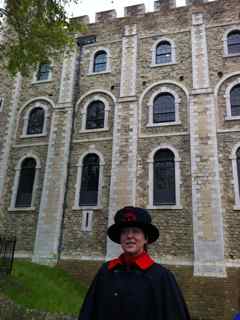 Saw crown jewels, beasts of the tower (I never knew there were lions and other exotic animals there for most of it’s thousand year history), and lots of armor and weapons. I remember dungeons and torture tools from the past but those are not there now – well two things but nothing scary at all. Charlotte has become very fascinated by graffiti in Europe as it’s on so many things but usually is quite artistic rather than simply swear words painted on. In fact the area we are staying in has huge displays and is supposedly a growing arts area with one focus of street art. Anyway she enjoyed the engravings in the rock walls inside the tower – the graffiti etched in by prisoners waiting to die!

We got back on the bus for more touring of London from a dry view! Our main thing was Buckingham Palace but sadly the entire front was blocked off because they were dismantling the stages and seats from the Jubilee concert. So we hit Oxford Street and found lunch and shops again. Very crowded there though and not as pleasant to be in. Ben was admonished loudly for wearing his hood going into a store because of security issues (hmm it was raining outside…) and I questioned why he was forced to remove his hood when half the people shopping were from the Gulf area and women were completely covered from head to foot. I missed good old Scarborough shops (and they were all the same ones really). But except for Oxford Street, all the sites are fun and enjoyable to see.

We had an early start the next day – 04:30 car to drive us back to Stanstead. Ryan Air does not have the choices in times or I would not have gone that early. But the price overruled tiredness and it was an easy trip home as we knew the process.