We drove and parked nearer to the main shopping area and then set off up the hill to visit the castle. I’ve spent various times there but when living in Scarborough you tend to pick warm and dry days unlike this trip. It did stop raining when we got into the main part of the castle thankfully and we had about an hour of dryness but it was quite windy and cool. Still the views from there are amazing and it is easy to see why this has been a castle/military post from early bronze age to Romans, Vikings, Saxons and even WWI. They found a bronze age sword there a few years ago but only the replica is in Scarborough with the main one in the British Museum so we decided to look it up when we were there a couple of days later. The Viking history was neat to read about and the children were able to make links to York from it.

From there we headed into town and hit the market and shops. The market used to be a big Victorian building that was dark and dingy, filled with stalls of low price items. It was busy and loud – a little daunting for children. Now there is a large lower level with little cafes and antique stores plus the main part is much lighter and airy and things seem very clean and organized. It’s certainly nice to shop there but has lost its edginess!

Ate at a traditional Yorkshire seaside restaurant (the kind of place my grandmother would have sooner starved than allow us go into) and had fish and chips and peas and huge pots of tea. I’m beginning to wonder if peas are the only vegetable we have available in England! Then did some more shopping, as I love Next clothing so wanted to stock up. All the Union Jack clothing and household goods are so neat to see (I was tempted by duvet covers) and it certainly makes you feel patriotic. Even food items are packaged in the flag and there is a huge quest to push everything British. The Jubilee and Olympics are fueling some of it but the trend started a couple of years ago with the recession and drive to go back to some of the “make do and mend” mentality.

We ended up spending another couple of hours down on the beachfront. The bumper cars and arcades were pulling the Littles in. It’s funny because there are no gambling hang ups in England so they merrily popped their 2 pence pieces into slot machines and other type games – seem to be same ones as I did growing up. Ice creams (99s – cone with a Cadbury flake stuck in) are just as good now too. 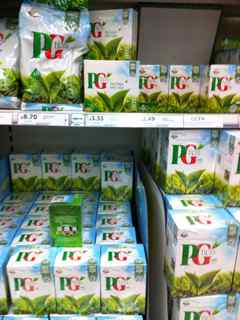 Tired out we hit Tesco and stocked up on food – ready meals are really good here. I found tea nirvana with the huge amounts of PG Tips and the new flavors (light/strong/hint of early grey…). Sadly Ryan Air dictates I not buy the 500 teabag boxes. We all slept like logs and my grandmother always said you do in Scarborough as it had good sea air.