The Littles and I headed out to Leiden today because we had read an older blog post here by Marta when she lived in The Netherlands and she described the Rijksmuseum van Oudheden, the National Museum of Antiquities.: http://www.rmo.nl/english/ 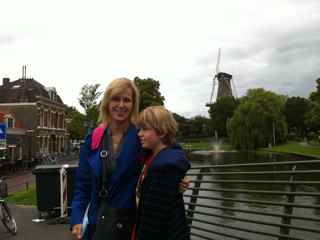 This is one of the top ten Egyptian museums and has lots of mummies and artifacts which made Max excited. There were very few people in the museum and it was a relaxing walk around for a few hours. There were great children’s interactive pieces and a nice bookstore and café. Children were free and I only paid 9 euros so a great deal. 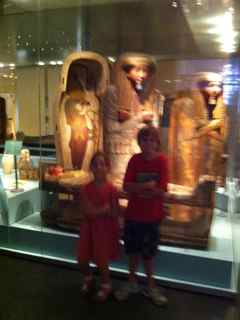 Sorry for the poor picture but the mummies were great!

We discovered a lot of other good museums in Leiden we want to go back to but just didn’t have time today. We did see the Pilgrim museum and where Rembrandt went to school. There is a great windmill near the train station that you can climb up in and learn about the history. The steps are a bit narrow, steep and tricky to come down after climbing about 5 floors – not accessible for all! 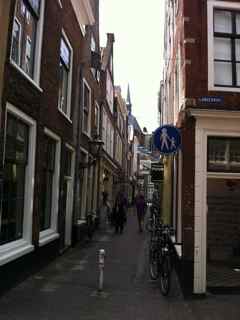 It was also market day (Wednesday and Saturday) and this was huge. The first one we found just straight down from the station and near where the boat trips go from (we are planning one of these for next time ) there was a neat antiques market. Then the main one was further into the downtown area and here were fruit and vegetables, flowers, snacks, clothing, material, fish, and everything you could want. It was great but crowded. We also found a British and Australian shop that had loads of Tesco products – hey we miss home and it’s so close!

The weather was nice so every outdoor café was packed with people. They all sell basically the same things: drinks, sandwiches or salads. There are toasties or brodjes Cheese, ham, or sometimes tuna either toasted or on a baguette. This seems to be the Dutch national dish!

Leiden is an old university town so had a few more “interesting” places too. The Littles spotted an Asian restaurant and fell into raptures at the pictures of sushi. They are huge sushi eaters but it is very expensive in Europe so have not had any for 2 months now. The price at this one was reasonable and 12 euros for them, 15 for me for all you can eat! This was not a buffet and they made all sushi to order plus some small cooked tidbits. It was very good although we all ate too much and needed a nap after!

The Littles proclaimed this a wonderful day. Mummies and sushi and NO rain! I agreed.