We hired a car to drive us to Kampot which is about 2.5 hours south of Phnom Penh. It was comfy despite 4 of us in the backseat but a nice Lexus 4-wheel drive. Not bad for $60. The longest part was leaving the city as it was heavy traffic and then the road is narrow so you have to dodge tractors, lorries, carts, and of course hundreds of motor cycles and tuk tuks. Driving is quite harrowing in Cambodia and I wouldn’t want to attempt it even with my Dubai skills! 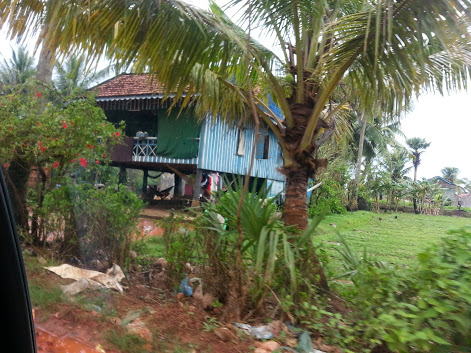 Kampot is a river town about 20 minutes to the ocean (Kep) and sleepy, laid back place. This area was the French Riviera of Asia 100 years ago and the old, crumbling, colonial houses still stand. A few have been redone but most need vast amounts of work and are falling down or have been patched up haphazardly. We stayed in a new place run by an Australian guy. Clean rooms, good bathrooms, cool air, and soft pillows (sadly not mattresses though) hooked us. Rooms were about $40 a night so on the higher end for the area.

We were intrigued by the people visiting this place. There was such a range from older couples to Australians with children and some backpackers. There were a few of the truly out-there backpackers with the dreadlocks, dirty clothes, and of course barefoot but most people visiting were kind of average. I wonder how they all heard about the place as it gets a tiny mention in guidebooks. Maybe word of mouth like us.

The region has a history of agriculture and is famous for peppercorns (Kampot pepper) and salt. There are large salt flats around but it is the rainy season and fresh water washes salt away so we didn’t get to see that in action. The pepper farms are neat. It takes 4 years for the plants to grow peppercorns and then they get one crop a year we were told. 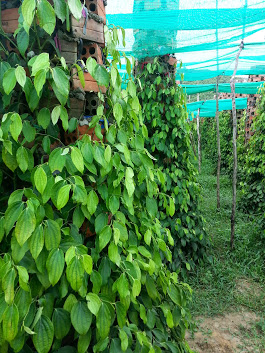 Kep is on the ocean and we visited on a Sunday so got to see lots of local families and minivan loads from Phnom Penh playing on the beach. I believe we were the only Westerners around just about and we were a curiosity. The kids are used to having their pictures taken and patted a bit now though. 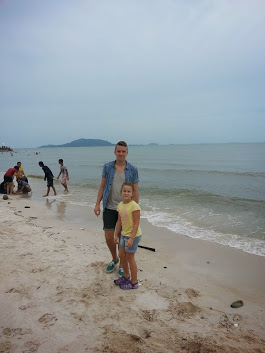 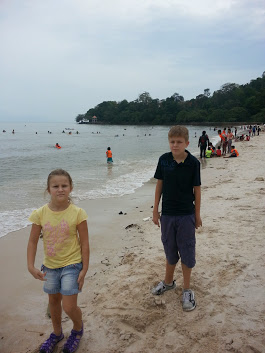 Kep is also “famous” for it’s crab. We had lunch in one of the restaurants in a long row that are built out over the water. Nice to have the ocean under us with gaps in the word to see it by! We had crab, shrimp, and squid all cooked with Kampot pepper. Very good although one tiny peppercorn per bite was all I could handle. 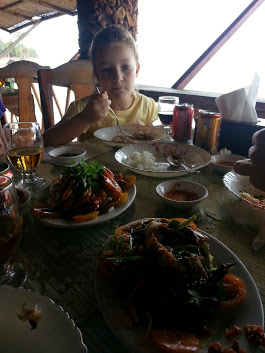 We drove through the countryside and past the secret lake. This takes you by many small roads so you can see family life there. The poverty is pretty intense. Most houses have small ponds beside them and this is where bathing and washing clothes takes place. Many women were standing in them scrubbing out clothing. The fields of rice seemed to be in planting stage as lots of people wading through the mud and leaning over planting. 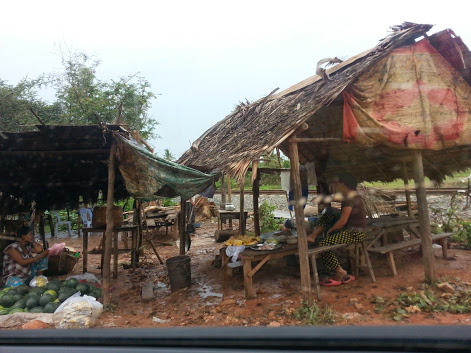 Tons of white, skinny cows and also water buffalo used to pull the ploughs. Pigs and piglets, ducks and tons of chickens are around the houses. Sadly most of the days we also saw children working in various capacities. Too many cannot go to school for lack of money and so work for the family. It’s a very hard life for so many. The mud from rains and flooding makes additionally hard. In a month or two some of those roads we drove on will be underwater. I can’t fathom how they will manage but they do. 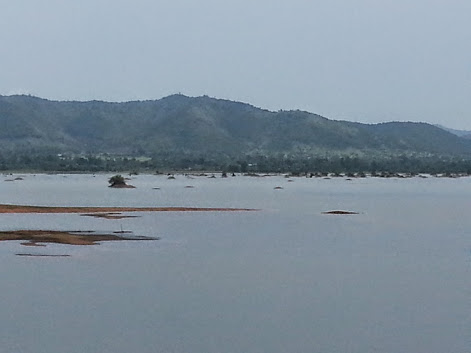