We knew it would be tiring but wow were we wiped out the first couple of days in South Africa. We left Florida on a Tuesday evening and had an overnight flight to Gatwick (9 hours). Then it was a car across London to Heathrow where we couldn’t check in and so hung around the front of the airport a few hours until they accepted our bags 3 hours prior to flight time (9 hour layover). That was Wednesday. We got onto the flight Wednesday evening and flew 10.5 hours to Johannesburg, which meant we had two overnight flights with one day at an airport in between. We were highly ready for proper beds and a shower by that point.

We got money from the ATM and a local sim card and then an easy drive to our apartment hotel. Then we slept – a lot. The first few days we took Uber to the mall and the Big Red tourist bus, which allowed us to see the city as an overview. Another day we headed to the zoo because we wanted to walk and enjoy being outside but since our knowledge of the parks was limited, the zoo was a safer option. It was a little sad in terms of animals but fun watching large family and friend groups picnic and play. We always like to visit zoos in new places as you tend to see locals more and get a feel for family life. Although the disclaimer at the zoo was a bit disconcerting given lions and tigers — oh my! 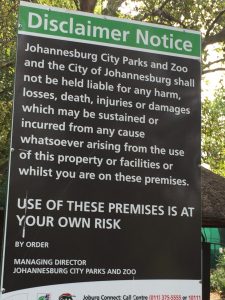 The best thing we did in the city was a tour by Felleng Tours. It’s run by a husband and wife who have really taken great pains to know the city and get to know local people; especially in Soweto. We spent a day with Rudy and it was such a joy getting to know him and see the city and hear so many stories. We went to Soweto because he was able to take us to an after school program and spend time visiting with them. I had been unsure before because I had visions of tourist buses zipping around to take pictures of all the poor people. But this was not like that thankfully. We visited a tiny little roadside café and tried the corn meal (think grits). 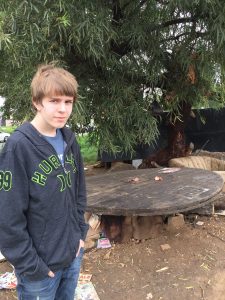 Max wasn’t too impressed with the roadside cafe. 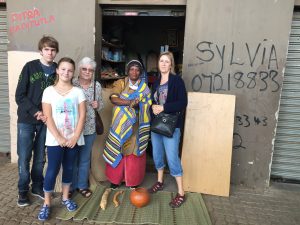 We went to a market and met a traditional healer (picture above). They are paid by the government to treat patients and are quite respected by government and local community. We ate the local doughnuts and walked around Freedom square where copies of the Freedom Charter are on display. 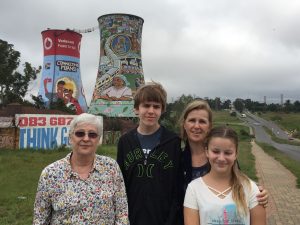 Then we went to Kliptown, which is the poorest township within Soweto. I had thought of Soweto as all one township when in fact it is many with millionaires (just a few) down to those still living in abject poverty. Some of the areas have small blockhouses and others are corrugated metal cobbled together into shantytowns. It was a huge area that seemed very vibrant and full of life. 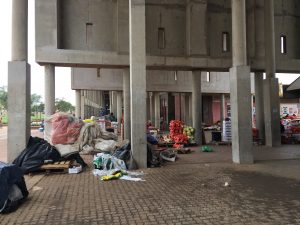 Later we visited the Mandela Museum, which was small (his former home) but interesting. Winnie Mandela still lives nearby and we drove by her house, which is quite a fortress with bulletproof windows etc. Still if you saw the bullet holes in their shared home and the stories about police firing shots and petrol bombs at the home when Winnie and her children were living in it, it’s easy to see why a fortress would be preferred. 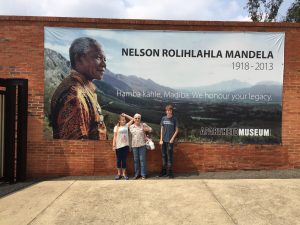 We were able to spend a few hours at the Apartheid Museum. It’s a lovely modern museum that shows the development of apartheid, South African history and the life of Mandela. A good way to spend an afternoon learning about the local history and also to see the links to other countries, political beliefs and find (sadly) crossover to current affairs in the US.