I didn’t want this organization to be buried in a blog post as it really is an amazing place. Kliptown is one of the oldest districts in Soweto and is where the Freedom Charter was signed in 1955 but it seems to have been left behind the other areas and is painfully poor despite more than 45,000 people living there. There is no electricity or running water or sewer available. People rig wires across roads to other areas and manage to steal electricity for periods of time but nothing is permanent. Water comes from 50 wells that are around the town and people gather here to fill containers for drinking and cooking, washing clothing, and cleaning off children. Toilets used to be buckets that were emptied in the night by paid workers but now they have porta potties in various spots around town. Sounds like an improvement but we were told that these are often not emptied for a long time and when they are, it’s during the day and fills the entire area with smell. Anyone can use them who walks by – community toilets. 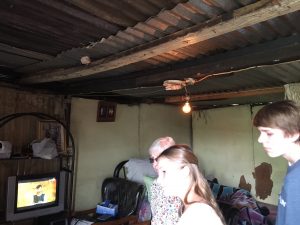 Inside a Kliptown house

There is an estimated 75% unemployment rate in Kliptown and one third of the residents are HIV positive. Many of the families are single mothers and teenage pregnancy rates are high. There are no schools, no healthcare, and no real shops to buy food and goods: remember this is for 45,000 people! 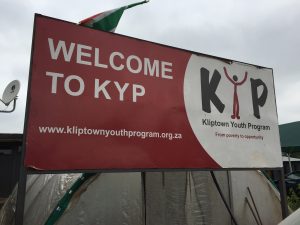 Within Kliptown is a charity youth program called KYP. They now help over 200 children everyday with breakfast, lunch, and after school academic, social, and sports support. KYP is working toward empowering young people to become self sufficient, successful and also to give back to the community along the way.

They received a large grant through CNN and were able to build a computer lab. The children take classes and use this after school plus during the day, classes are held for adults in the community. There is a large kitchen where staff prepare sandwiches for children’s breakfast and then later a hot lunch. 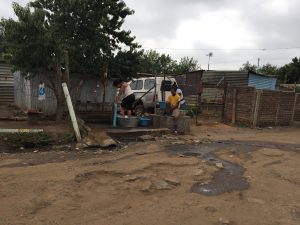 One of the community wells

There are NO schools in this township. Children must walk to other areas for school and this is often around 45 minutes each way and across rail lines and busy roads. If they are able to get there, they face stigma at having no uniforms or books and so KYP provides these. Children were also hiding in classrooms during break because all the other children had sandwiches to eat and they had nothing. KYP now provides sandwiches, as that is often the children’s only breakfast/mid morning meal.

When they first started, KYP promoted university attendance with all their graduates but quickly found out that this was not necessarily the best fit. So now they work one on one with high school students to help them figure out what they would like to be trained in or learn as a career. Sometimes this is a trade school and sometimes two year or four year university programs. They have quite a few successful graduates who now give back to KYP.

There is a community garden and parents are asked to help work in the school in some capacity. Extra vegetables are given to parents and very little waste is thrown out because much of the kitchen scraps are also given to families in need.

The program fund raises through sending the dance group and teacher abroad plus of course visitors who are offered t-shirts to buy (no pressure is put to donate at all), and online fundraisers.

Anyone traveling to Jo’Burg is invited to visit the program or spend time volunteering, as there are many ways to help. Please consider taking a look:

Off to Port Elizabeth and Addo National Park