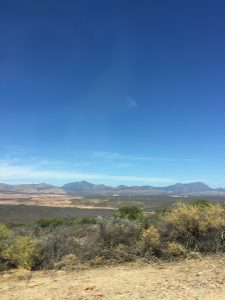 Views driving up to Oudtshoorn

Ostriches and cheetahs were the memorable pieces of this town in the desert. It took about 1.5 hours to get here from Wilderness and the drive up was lovely with well maintained highway through mountain passes and into the little karoo.

As soon as we got into the desert we started to see fields with ostrich in them. Seems to be loads of farms up here. We visited a big tourist one and got to learn about the whole process of farming them. A tractor ride around the farm and feeding them was enough; the kids chose not to ride the ostriches. Max did get closer than the rest of us – we are just not bird people. 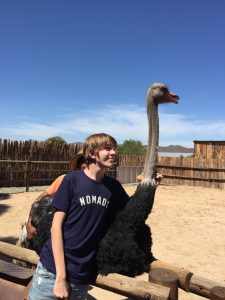 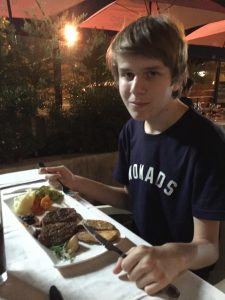 The next day we visited Cango Animal Ranch and it was really fun and informative. The animals are pretty close and the guides are well informed about them. They have a couple of electronic surprises that make you laugh but aren’t overly cheesy. 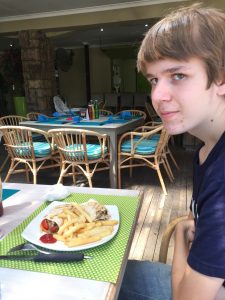 Max eating croc — seems to be a trend for him! 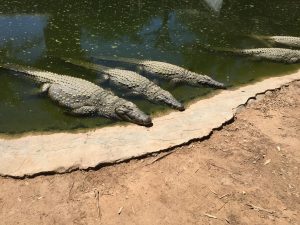 The best was the cheetah encounter. We saw a couple do this earlier and the cheetahs were fast asleep (the do that for about 20 hours a day) and it didn’t look too scary to hang out with these lanky, SLEEPING cats. However we decided to have lunch and then go in and apparently the cheetahs also had lunch and woke up. 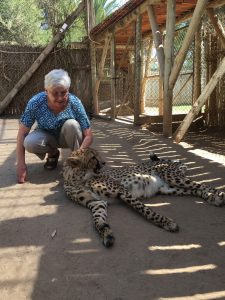 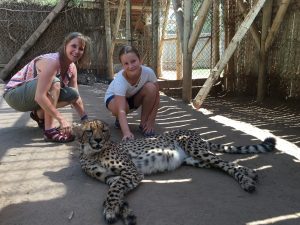 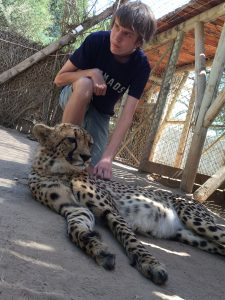 We were taken to the first area with “the girls” but they were pacing and looked a bit active so the guides took us to the boys’ pen. These two were also wandering around and were certainly more playful than earlier. I almost backed out and wouldn’t let the kids in but Grandma set off with gusto following the guide so we were committed then! For a woman who an hour prior had raced away from feeding the birds, she was suddenly

The cheetah lay down with a sigh and then started to “growl” which was nerve wracking. The guide laughed and just kept petting him and shared that he was simply purring like a house cat. Everyone had a turn petting him and the guides were clearly very comfortable with these animals and you could see they respected and cared for them a lot. 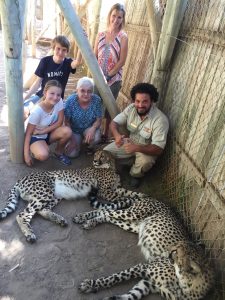 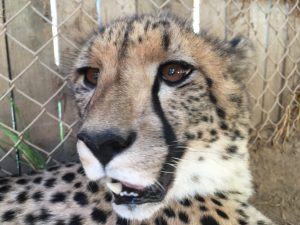 The cheetahs are bred at this ranch and are sent around the world to zoos and parks in order to strengthen the gene pool, which is apparently a bit weak (inbreeding in the wild due to reduced areas to live in). They are not sent to ranches where they are killed as the lion parks do. The lion parks breed lions so visitors can play with the baby lions but they are later sent onto ranches where rich Americans can come in and shoot their trophy easily because the lions are tame and unafraid. We had read about those and chose not to support that unpleasant and sad side of tourism. Also the cheetahs are certainly not drugged as the tigers are in Thailand (thankfully I’ve read that has been closed down). These creatures were lively for sure. 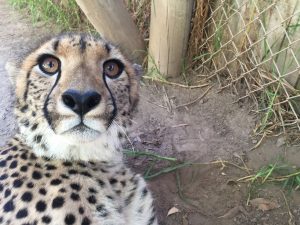 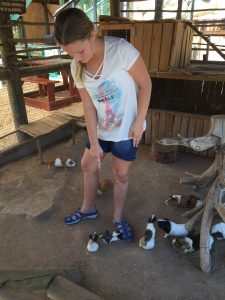 Later at dinner, Charlotte asked us all which or favorite animal was. We all chose the cheetahs or tigers. She however sighed and shared that her favorite were the baby guinea pigs. They had a petting area with a big pen full of about 30 guinea pigs and she was able to sit in there and feed and play with them for ages. Those were her chosen favorites: such a softie.