Cape Town showed us multiple weather conditions from hurricane force winds to hot afternoons in the outside pool, cold rain, fog, and lovely cool days with low humidity. We heard you can get 4 seasons in one day here and this was certainly evident in Cape Town. 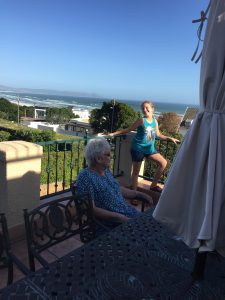 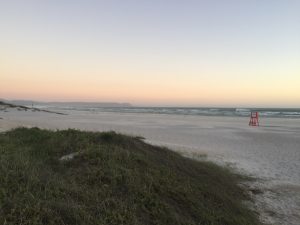 Table Mountain had impressive clouds over it often, which seemed to bring rain soon after. We headed down the coast to the Cape of Good Hope and had glorious blue skies. 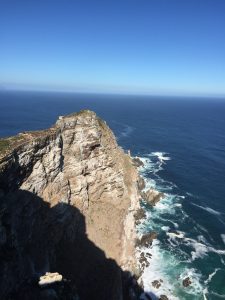 The journey ended up taking about 7 hours working our way slowly to see penguins on one coast and then ostrich and baboons at the national park, which takes up the lower half of the Cape. This is the second southern most spot of Africa (Cape Aguila is the main one) and you can see both the Atlantic and Indian oceans. It was really gloriously blue and clear on the day we were there but it was easy to imagine the high winds and storms that have caused many a shipwreck off those coast lines. 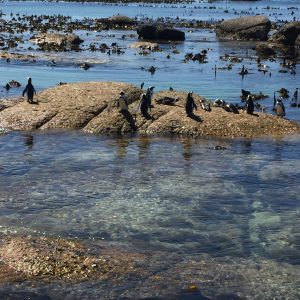 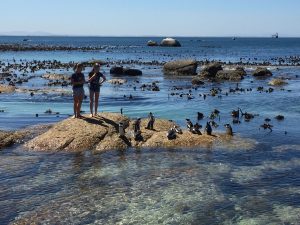 The penguins are primarily located at Boulder’s Beach. We stopped at the beach right next to this one, which is free and had more penguins we are told than Boulders. They were very laid back and didn’t seem frightened of people but as they bite, we didn’t get too close. The water was incredibly clear around there and wasn’t that cold (too much for me). 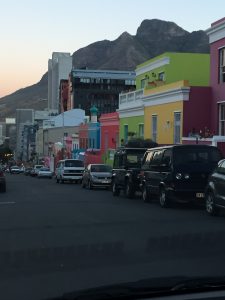